HAPPY FRIDAY 13th!!!! Many of us are probably wearing rabbit feet, garlic, crosses, and doing other things to make sure that we don't have bad luck on today.  However, I'm not superstitious. Never have been. I just don't believe in luck.
Whenever Friday 13th comes around I think about the "Friday the 13th" series of movies that deal with the possessed, hate filled, seemingly unkillable, slasher Jason Voorhees. 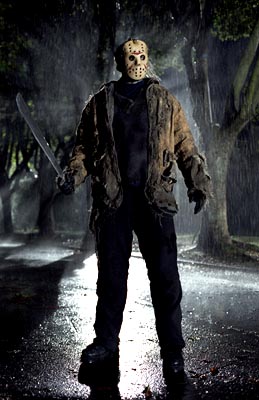 Jason was a kid who had special needs who was killed during a camping outfit at Camp Crystal Lake. As a revenge his mother stalks and kills teens, but is decapitated by one of the stalked counselors and Jason sees it and therefore begins his bloody revenge. Anyway, I don't think I'll be watching this anytime soon. I've watched it too much along with the 200 remake.
Well again, Happy Bloody Friday 13th.