That is Not a Man's Bracelet 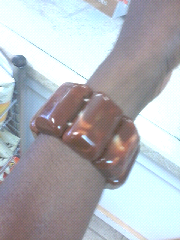 The picture above was photographed on Tuesday, June 19th.  This is a bracelet that was given to me from a suitor sometime ago. It was around this time last year.  It really has not sentimental value.  I wear it because it appears fashionable to me.  Well It is something only I would wear.
Well on Tuesday I had to go with a relative to an appointment and I wore this bracelet.  As we approached the car,  I was asked "Why are you wearing that bracelet? That is not a man's bracelet."
Of course I simply said "It's my bracelet and I think it looks good.  It's just a bracelet. Plenty of guys wear these things."  Of course that particular relative had this old that disgusted look, but it didn't matter to me.  The Last time I checked jewelry had no gender.  But however, I live in the South.
What is it about living in the South if a man wears something like flip flops or either skinny jeans hell even male gladiator sandals he is looked at wrong?  In the south a man is supposed to look like a lumber jack, but that isn't my style.  I remember growing up if a guy wore flip flops he would automatically be labelled gay.  I didn't know what you wore determined your sexuality.
I guess it is shear ignorance and being stuck in a dumb anus tradition.  It doesn't bother me. I'm going to live my life and be dang happy.  I've been catching heck about whatever I decide to wear, go or do, but  it is okay I'm happy.  What is it with these people in the south?  Is everything supposed to be ubermasculine?  No, I'm naturally feminine.  I guess that's why I'm eccentric.  I've always been that way.
I guess since it's not a man's bracelet, I should keep it.
Email Post
Labels: black gay men bracelet fashion gender identity lgbt Life musique's poetry same gender loving sgl men