Skip to main content
Labels
Posted by Musique's Poetry May 09, 2014 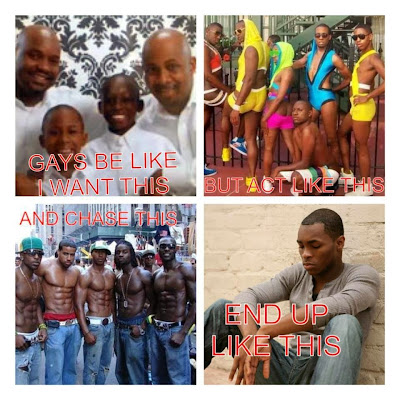 Do You Agree With This?

I happen to come across this picture on Facebook earlier.  The picture depicts gays wanting a loving relationship, but since they act flamboyant, or feminine, they chase after muscles but end up alone.  Do you agree with this?
It seems that all you see with a lot the Black Community is that they want a hypermasculine man, when not all of us men in the LGBT community are masculine. Don't the flamboyant, feminine even messy queens deserve love to?  To me this represents that if a man acts with the slightest bit of femininity that he is worthless like a penny with a hole in it.
Personally, I don't agree with this picture. While it is impossible to find the model that will love you for you, I do find it possible for a feminine, flamboyant dude to find someone who will accept him for him. I didn't know that just because you express yourself in a certain way, listen to Beyonce, or have a break in your wrist that you are worthless. The last time checked, I'm wonderfully and fearfully made.
This also shows that how the guys dress should automatically shows how they act. It also disqualifies them from having a family.  This is just a stupid and ignorant statement. Those same men who are dressed in the bright colored outfits could make better fathers than the muscled boys in the picture. Only a jackass with muscles would deem themselves better than a feminine dude. In my opinion feminine are more comfortable than a lot of my "men" in the Black LGBT Community.
They may be dressed feminine, but some of them may actually be more masculine and more of a man than the chiseled bodies below.  As a follower on my twitter page, RedBeauxTie, states, the above collage is "laced in misogyny, effemiphobia, etc." I can truly see that.
When will the self hate in the Black LGBT Community especially among the males end.  For so long the Black race has been taught to hate itself till it seems dang near impossible to end self hate.  If someone won't date me because I express myself through my fashion, my mannerisms aren't man enough, or because drag entertainment is apart of me, then I'm too good for them.  I love me and I am free while doing it!!!
I'm off my soap box for now,
Musique.
Email Post
Labels: feminine men versus masculine men hypermasculinity