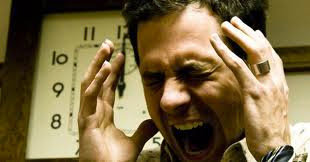 It's Friday and I'm at work more irritated than an elephant's ear!!! I work in a field in which I deal with the general public.  I've learned that dealing with the general public you will encounter, the good, bad, ugly, ratchet, and plain stupid!!! Dealing with the latter 4 of 5 types of mention people that I have to put up with, has really ground my gears into the freaking ground. From helicopter parents from people upset because they failed to make their payments on time to people who call while their kids are yelling in the background which causes me to repeat several times info that they have requested, to people not being prepared to discuss their account, but they've called me with an attitude over their stupidity, I'm working on a wing and a prayer.
Is it bad that I've had to turn to the Holy Bible for some type of remedy? Not to mention I'm in the process of moving back in with Uncle Dearest (groan and falls on face wearing sackcloth and rolling around in ashes as the Old Testament Saints did) because my roommate let's me know at the last minute that he is moving in with his boyfriend and I have till the end of the month to move.  I'm like WTF? Who does that? Oh I forgot a desperate, love struck idiot that knows his boyfriend doesn't want him.  Nevertheless I've managed to pack up my belongings within a matter of days and I'm almost done packing and relocating. I thank God for friends that are willing to help with the relocation process and packing. Inspite of all the irritation and nerve killers I'm suriving.
I'M STILL SEVERELY IRRITATED,
Musique
--
♫Musique's Poetry♫
Email Post
Labels: drama feelings irritation work