THE REPUBLICAN TAKE OVER 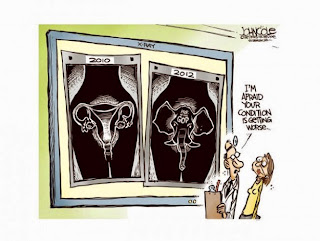 So as of November 4th , 2014, The Republicans have taken over the Senate and House. I am very disappointed and irked.  I'm irked because I let people know the importance of yesterdays elections. NEWS FLASH: THE PRIMARIES ARE JUST AS IMPORTANT AS THE PRESIDENTIAL ELECTION.
Not only will families and equal rights be in danger, but Marriage Equality, ENDA for LGBTQIAP members of Community, and everything that the current administration has worked for.  In my opinion it will be a little more difficult to get things done the RIGHT WAY!!!
Now while everyone is playing the "blame Obama,"  game, you must also look at the dimwits that he's had to work with. Bigoted, traditional, hypocritical Republikkkans, that only have their best interests at heart.
What I don't understand is why poor, Gay, and Black people would vote for a group of people that does not hold them in any regard whatsoever?  Some please riddle me that!!!! This Republican may prove fatal, however the Republican party may have their hands full. Do they not know President Obama can veto each bill that they present. The Republicans may have crapped and stepped in it.
Only time will tell. However we as American citizens must stand and fight and let our voices be heard...I want to be able to marry who I love and I want equal protections and affordable healthcare.
Who's with me?!!
--
♫Musique's Poetry♫
Email Post