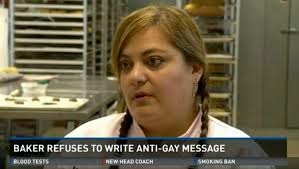 A dispute concerning a cake in Colorado adds new questions about the rights and religious freedom: If bakers can be fined for refusing to serve married gay couples, can they also be punished for declining to make a cake with anti-gay statements?
In a new case Marjorie Silva, Owner of Denver's Azucar Bakery, is facing a complaint from a customer alleging she discriminated against his religious beliefs.
According to Silva, the man who visited last year requested a Bible Shaped cake which agreed to make.  However as they were  completing the order, Silva alleges the man showed her a piece of paper with hate speech  concerning gays that he wanted on the cake. He also wanted the cake to have two men holding hands and an X on top of them.
Silva stated that she agreed to make the cake, but declined to write the hate speech. She also suggested she'd give him icing and a pastry bag to write the words himself, however, the customer did not want that.
"It's just horrible. It doesn't matter if, you know you're Catholic, or Jewish, Or Christian, if I'm gay or not gay or whatever," Silva said, adding that she makes cakes regularly for all religious occasions.  "We should all be loving each other. I mean there's no reason to discriminate."
Discrimination complaints to Colorado's Civil Rights Dvision, which is reviewing the matter, are confidential.  It is for that purpose that Silva declined to share the correspondence she's had with state officials.  KUSA-TV has reported that the asshat  complainant is Bill jack of Castle Rock in Colorado.  Jack has been quoted as saying h believes that he was discriminated based on his creed.
Jack is really making me laugh. I applaud Silva for standing up to this bully.  Jack has not returned emails or answered the listed address.  He has decided to wait for the director of the CCRD to release his findings before making further comments.
This case comes as Republicans in Colorado's legislature talk about changing the state law requiring that businesses serve gays in the wake of a series of incidents where religious business owners rejected orders to celebrate gay weddings.  Sen Kevin Lundberg (R) states that this is a new clash of values and argued that Colorado's public accomodation law is not working.
Silva stood up for her moral values and did not violate her moral values.  However with a previous baker that denied a gay couple service has made the same argument.  There is not law stating that a baker must write obscenities because the customer wants it as told by Mark Silverstein, legal director of the American Civil Liberties Union in Colorado.
WOW so because someone would not write hate speech against gays, she's considered a villian. The real villian is the religioius bigot.
Email Post
Labels: Azucar Bakery Bill Jack Colorado gay rights Hate Speech Marjorie Silva