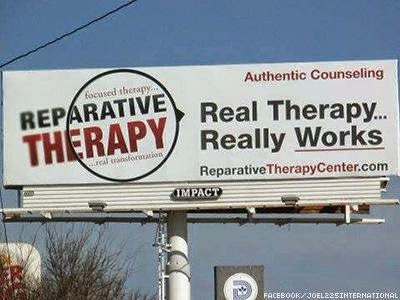 A Dallas billboard promoting futile Reparative Therapy for Homosexuality will be removed. Terry Kafka, President of Impact Advertising has stated that the billboard that promotes "Focused therapy, authentic counseling, real therapy," that really works, will come down.  It even includes a url to "Ex-Gay" Therapist David Pickup's website as pictured above.
Kafka stated that until Wednesday morning that he had been unaware of the billboard and what it was promoting.  Kafka "had been told and led to believe this is a marriage therapy, that it's couples' therapy. Now we're looking at the website and we see that was not actually the case. To be very honest with you, we had no idea what we were putting up."
Kafka states that as president of the company, Impact advertising, had they known what the billboard was about it would've went through more critical examination. The company believes in the "live and let live" policy.
Now that Kafka is aware of this controversial billboard and what it stands for, he will remove it within a week. The billboard has been up for a little over 2 weeks.     Although it was contracted for a four week run, the worst cast scenario is that it will be removed by the 26th of January and that Kafka and his company will refund Pickup and the "Ex Gay" movement their money for taking it down early.
Email Post
Labels: EX Gay Movement LGBT Rights Reparative therapy