Utah to Use Firing Squads of Lethal Drugs Unavailable 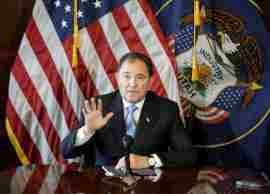 Utah is now the only state that is allowing execution by firing squad.  Governor Gary Herbert signed it into law on Monday on the grounds that it would be done only if lethal drugs (used for lethal injection) are not available, even though he has called it "A little bit gruesome."
The Republican Governor states that Utah is a capital punishment state and that it must require a back up execution method.

"We regret anyone ever commits the heinous crime of aggravated murder to merit the death penalty, and we prefer to use our primary method of lethal injection when such a sentence is issued," Herbert spokesman Marty Carpenter said. However, enforcing death sentences is "the obligation of the executive branch."
In other statesn such as Washington, an inmate can request hanging.  In Oklahoma Firing Squads are possible if electrocution and lethal drugs are ever labeled unconstitutional....What will the jackasses think of next?